Yet another gig wrecked by the mindless few
Broken heads and toilets is what they're out to do
Yet another gig wrecked by the mindless few
They've got to be stopped and it's up to me and you
For breaking up our concerts who needs the pigs?
When there's idiots like these who smash up our gigs
They gob on the bands and ruin the atmosphere
Well don't come back 'cos you ain't welcome here
Kicked in the toilets and smashed up the chairs
Just another venue with no punk gigs there
And I bet they thought that they were really hard
But the only result's another venue from which punk bands are barred
fotky 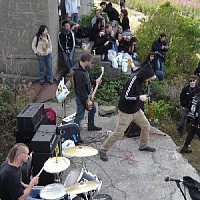 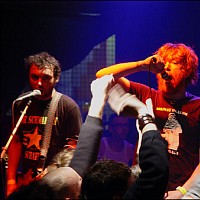 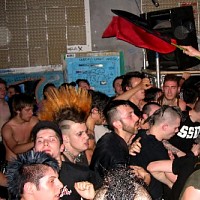 Oi meathead! So you've smashed up a toilet eh? Hey, you must be really punky! Big hardman eh? But of course
toilets can't fight back can they?
Just like most of the folk you pick on at gigs. They're always weaker than you or else you've go a big crowd of
your mates with you to back you up. Hey! Big hardman! You get your kicks out of smashing up venues and
ruining folks' nights out - moron. Think you're really hard but all you do is close down venues and muck up our
scene. Call yourself a punk or a skin? You're scum. Folk like you make me sick - Pathetic little creep.
Went to another gig out for some fun
But it wasn't long before the trouble had begun
Group of idiots picking on folk on the dancefloor
Punched and kicked 'em about and then did it some more
Well it made me so sick that I couldn't stand back
So I went to help some people fomr the mindless attack
But no one backed me up so then I was kicked about
If we don't want these idiots at our gigs we must all throw 'em out